I wrote the other day about our horrendous sleep issues.

Moe also hasn't been eating well. We're not sure if he's not sleeping well because he's hungry, or if he's too tired to eat. Either way, it is a vicious cycle, and although hunger doesn't explain every night, it may be largely to blame for this bout of insomnia. On Thursday, he woke up at 4:30 in the morning and sat down at the kitchen table for a snack. We gave him one and he went back to bed.

I've started a sleep and food log to try to narrow things down. In setting this up, I also realized that I had started Moe on a new vitamin. He's taken a multi-vitamin for a while, but I ran out of the fancy orange ones I usually get him and bought the gummy bears at Costco. It's possible this new vitamin upset his stomach. I hope not because I have a Cotco-sized vat of them, but for now we're taking them out of the equation.

We've also started doing everything we can to make sure Moe goes to bed on a full stomach. This doesn't necessarily mean he has the healthiest diet right. The other day, the kids got to split an Oreo cookie milkshake. At first, Moe would not even touch it. But after seeing Jelly bathing in hers, he got up the courage to put his fingers in it, then finally taste it. Once that happened, he realized the error of his ways and devoured the rest. He even used his spoon, something we've had trouble getting him to do recently.


And today, after dinner, they got Hostess cupcakes. 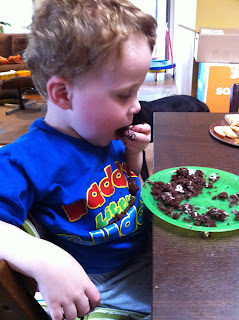 It's been years since I've eaten one, but my mom used to buy me and my brother these cupcakes sometimes. Moe is a cake eating machine, so he saw it and immediately dove in. He then tried to grab Jelly's from her plate.
Meanwhile, she was meticulously picking the hard icing and while swirl off the top, eating that part first, just like I used to do.

Posted by Wantapeanut at 2:45 PM