When Moe was very little, around 18 months or so, he understood a lot. He would point to body parts and objects in books. He knew all the letters of the alphabet, and would point to them on request. At some point, he stopped being able to do this. We don't know if he lost the knowledge or that somehow there was a disconnect between the understanding of the request and his ability to actually follow through.

That, however, was more about labeling items than about following directions. Moe continues to have trouble pointing to things in books, though again, whether this is an issue of understanding, attention, visual processing or just plain "I don't want to" is hard to tell. But what I do know is that Moe is following directions more than ever before.

It started slowly, and was very context sensitive, often requiring a gestural cue or sign to accompany the instruction. If Moe was in the bath, for example, I could ask him to "let the water out of the tub" and point to the drain. He would then let the water out. I could point to his shoes or touch them, and tell him "take off shoes," and he would do it, or at least try. With more repetition, we could fade the gestural cue.

But now, it is clear he understands the language from the start. We've been working with Moe on some simple tasks, asking him to do things like "touch nose, show me your head, where's your knee, etc." This isn't just about teaching Moe body parts, although that is part of it. It is about helping him learn to listen, to discriminate the words we are saying, and follow through on the words he is hearing. It seems to be making a difference.

He can understand more complex instructions too. If we're in the kitchen, and Moe asks for something to eat by pointing at it, I can say, "Okay. Go to the table," and he'll leave the kitchen and go sit down at his spot at the table. I can say "It's time for bath," and he'll sign bath and go right to the bathroom door. He knows what it means to clean up, give an object to someone, drop or pick something up, etc. Some of these are things we explicitly taught, and some are not.

Moe still requires a lot of contextual cues, especially with new instructions, but don't we all to some extent? Sometimes it seems Moe still may not be able to physically put the pieces together to follow through on an instruction, although that is happening less and less. And of course there are times he doesn't want to do what we're asking. He is a five year old kid, after all. But there is a qualitative difference in his understanding of language.

This isn't about teaching Moe to just be "compliant." There are some things you need your kids to do (come here, clean up your toys, get dressed) and of course there are safety issues as well. For a kid that puts everything in his mouth "drop it!" and "spit it out!" are pretty important. And one of the newest directions we've been working on is "stop!" He's learning so quickly these days that with just one teaching session, he knew what stop meant. It took his school a year to get to that point, and then only in very specific circumstances. Now we're working on "stop" in different environments, with him walking toward and away from us, and Moe is doing it with a flourish. He always makes sure to stomp his feet just a bit when he stops. I think he's making sure we noticed.

This is third in the series of things Moe can do. For the others, click here

Email ThisBlogThis!Share to TwitterShare to FacebookShare to Pinterest
Labels: autism, what Moe can do

I've been trying all weekend to put my thoughts together, to find the thankfulness in the days. I have a lot to be thankful for: my house wasn't ravished by a hurricane, we were able to put food on the table without counting the days until our next paycheck, we made a great dinner in a lovely kitchen and we ate together, the four of us plus my parents, who are healthy and able to come visit regularly. I am thankful for all of these things.

But the weekend was tough. Wednesday night both kids were up several times during the night. I went to bed at eleven. Jelly was up at one in the morning, asking me to wipe her runny nose. At three, a picture fell off the wall, scaring the crap out of us and making a loud racket that woke both kids. Moe was up from four to well almost six. He finally fell back asleep but of course Jelly was up and wandered into our room by seven-thirty. The rest of the weekend went much the same way.

We were all sleep deprived and short-tempered, unable to manage Jelly's whining and Moe's behaviors, which escalated quite a bit this weekend. He was about as disregulated as I've ever seen him, thrown off by lack of sleep but also the arrival of grandparents and four days without any therapy sessions. We were fortunate enough to have good weather, and spent quite a bit of time outside so he could run and climb. But when indoors, Moe still wanted to climb all the time. We rescued him several times from the top of the mantle, once from the high shelf at the top of his closet, and once sitting on top of the refrigerator. Even with extensive child-proofing, he requires more and more vigilance and it is exhausting.


This year, we declined dinner at my BFF's house because I thought it would be easier. And so, though our small thanksgiving was lovely, and it was easier, it also felt a little lonely. I don't know if anyone else felt this. Perhaps my emotion was colored by Moe's difficulties, or memories of my brother whose birthday was just three days prior.


Thanksgiving used to be one of my favorite holidays. I have so many memories of eating with aunts and uncles, talking and enjoying so much laughter around the table. We'd often play a game afterward, and always ended with several pies: pumpkin and/or sweet potato, homemade apple, and always chocolate pie, my brother's favorite. When I first had Moe, I imagined these traditions continuing, and his first Thanksgiving was at Grandma and Grandpa's house. I can picture what this could be like now - the kids running off to play after dessert while the adults drink coffee and laugh some more.

I know I am supposed to reset my expectations. I know that it isn't fair to carry my expectations of a perfect holiday, if such a thing exists, to my family now. We are no longer the same people. And I try. I try really hard. I try to enjoy the time together, remind myself that disappointment is only in the comparison, not in the thing itself. But most regular days, I struggle against the feeling that this isn't the life I planned for. The holidays make that so much more apparent.

Posted by Wantapeanut at 4:25 PM

The walls were light green with white wainscoting and I thought dark wood furniture would make the room feel more grounded. Modern. Just right for my baby boy.

A couple years later, dark finishes would be everywhere, but at the time blond wood was the fashion. I found a crib with an espresso finish, but couldn't find a dresser that was just right: big enough and not too tall so it could double as a changing table. 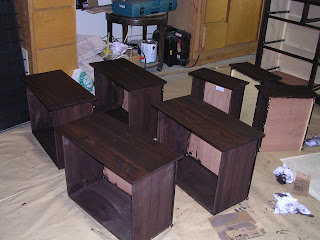 We found an unfinished dresser. The dresser, in itself, was nothing special. Pine. Simple. But the work we put into it was the very definition of a labor of love.

Jeff stained it to match the crib. I added jungle animal drawer knobs, lined the bottom with shelf paper and filled the drawers with baby clothes.

The top right drawer held diapers. Socks in the middle drawer. Jammies on the left.

As Moe grew, the contents evolved. The bottom drawer had to give up its blankets to make room for shorts and swimsuits. Jeans and t-shirts replaced onesies.

Other things changed. Chewies and sensory items, stretchy vests and a bright green body sock found their home in the top left drawer. Some things stayed the same. Diapers, replaced by pull-ups but diapers nonetheless, remained in the top right drawer.

Last weekend, we had to donate the dresser. Moe had been sleeping in a bed tent, and after a year or so of being climbed on, one of the poles broke. The tents are on back order and we needed a change. So we took down the tent, and to keep Moe safe we took all the other furniture too. The toy chest went to his sister's room. The swing and his little work table can be relocated every night. But there was no place to put the dresser. It had to go. 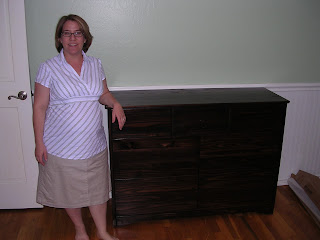 Jeff brought the dresser to Goodwill. They almost didn't take it at first, but thankfully they did. I busied myself fighting holiday traffic (already!) to get a set of drawers that would fit in Moe's closet. It was the right thing, the safe decision.

The next day I had another donation to make, this time of outgrown clothes that I had collected emptying the drawers. I drove back to Goodwill, and I couldn't help myself. I went inside.

And there it sat. My dresser. I tightened the drawer knob that always came loose. I knew it was just a thing. But that thing had seen us through a journey. A journey that began with hopes and dreams and the cutest little baby you've ever seen. And just as those hopes and dreams have had to be adjusted since Moe's (still the cutest boy you've ever seen) diagnosis, some practical things have had to be adjusted too.

Even so, I cried on the way home.

Originally posted at Hopeful Parents, where I contribute on the 14th of every month

Posted by Wantapeanut at 9:18 AM