Moe is a beautiful child. I'm not saying this because I am his mother and I have to think he's perfect. He really is gorgeous.

He has light blue eyes.


He has perfect curly hair.

He has a button nose, and rosy cheeks, and a perfect smile filled with perfect little white teeth.

I've heard it said many times that kids with autism tend to be unusually good looking. Moe's teacher said she's noticed in her many years of experience that her autistic students are almost always really beautiful. She noted "it's not fair," and I knew exactly what she meant.

Then again, isn't it fair? Since one of the primary markers of autism is difficulty with social interactions, wouldn't it be only fair to have a beautiful face, one that might draw people to you? Genetically this seems to make sense. Adults with autism (or shyness or other social anxieties) might find it difficult to meet people. But those who are good looking might have a better chance at attracting a mate, passing along both those beautiful features and their autistic ones. (This may also be why there are such high rates of autism in the Bay Area: all those smart engineers who are valued for their brains and higher earning potential. Those "geeky" traits might not be fully appreciated elsewhere.)

Moe's teachers are immediately drawn to him. He is a lovable kid, but he can be difficult, mischievous, and frustrating. He bites. He makes an enormous mess at snack time. He takes off his diaper. Jeff and I often find ourselves saying "it's a good thing you're cute." I know Moe's teachers and therapists would teach him with love and professionalism no matter what he looked like, but his adorable features do serve him well. You want to help him. You'll do almost anything to see him smile.

This isn't always a good thing. During Moe's intense year of ABA (behavior therapy), Moe walked all over some of the less experienced therapists. It's hard to say no to his face. It's hard to make yourself stop his giggles to get Moe to focus and do some work. And he knows it. He uses it. 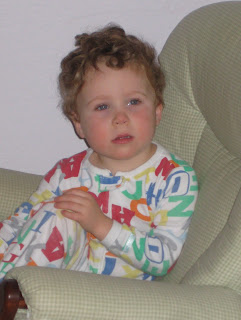 Written for this week's Red Writing Hood prompt: Physical beauty. It can open doors - and can also shut them.Write a scene in which a physically beautiful character is somehow impacted by that trait.

Posted by Wantapeanut at 8:02 AM