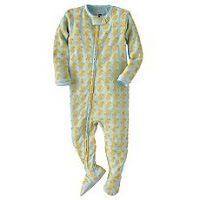 Once, when I was a little kid, my brother, who couldn't have been more than 3 or 4 at the time, needed some new pajamas. It was nighttime, and my dad had to go out and buy them in some kind of pajama emergency. I remember this being in our house but I can't imagine a case where the pajama supply would have been so low that he had to go buy new ones rather than wear ones he already had. I also seem to remember my dad was going to go the local drugstore, Sav-On, to get them, which also now makes no sense to me. I'm sure I have the facts

But the point of the story is that we asked my brother if wanted pajamas with feet or without feet. I remember he was very upset, but he said he wanted ones with feet. So my dad went out and bought pajamas with feet. He came back, and tried to put them on Billy, but was met with some serious unhappiness. It turns out that what he meant by "with feet" was that his own feet would show, rather than the footed pj's we thought he meant. It makes sense when you think about it.

Jelly is almost 21 months old, overachieving at everything including her early entrance into the terrible 2's. I'm not into foursquare, but if I were I would be the mayor of tantrum city. (If you don't know what foursquare is, it isn't important. You get the idea. She throws a fit about 100 times a day.) Jelly talks a lot, and is remarkable and making her needs known, but sometimes I know I'm talking right past her. She will often mix up things like off and on, telling me to turn off something when she really means that it is on, or whatever. It's a completely age-appropriate thing for her to do, but it often means I'm not getting her what she wants even though she thinks she's being very clear.

Watching Jelly's language develop has been a real eye opener for me and shown me not only how powerful communication is, but also how easily it can break down.

Posted by Wantapeanut at 6:00 AM