Yesterday started off like any other day. I was excited because my BFF and her two boys were coming over for dinner. I made pizza dough in the morning, Jelly and I had the first day of the new session of music class, and things seemed under control. Oh, how wrong I was.

A little after 4:00, Jelly was watching Sesame Street and Moe was doing what he always does when the TV is on: watches a bit, runs down to his room, plays a bit, and comes back. He doesn't sit still for long. If he's out of my sight for too long, and I can't hear what he's doing, I check on him, and often will find him in some precarious spot like the top of his toy bin or standing on his dresser.

He's also a little bit clumsy. I'm sure this is because of his motor delays and nothing to do with my athletic prowess. It isn't unusual for him to trip occasionally as he runs down the hall. So yesterday, when Moe tripped in the living room, I barely even looked up. He wasn't on top of a bookshelf or swivel chair; he was maybe ten feet away from me. But Moe never cries when he falls. He always just gets back up. He cries when he's hungry or frustrated, but like many kids on the spectrum, he seems to have a very high pain tolerance or experience pain differently than you and I. So when he didn't get up from the ground, had his head buried in his hands, and started crying, I went to him.

And when I picked up his head, all I saw was blood. I ran to get a clean towel, and see what was going on. It wasn't his teeth or eyes, but a pretty deep cut on his forehead. I was worried at first that he actually landed on something, but that didn't seem to be the case, so I just held him and applied direct pressure.

Jelly was aware of what was going on, but since she doesn't understand blood yet, she wasn't too freaked out. The dog, ever sensitive to the slightest increase in stress in the room, immediately started barking. She always knows how to make a difficult situation just a little bit harder. 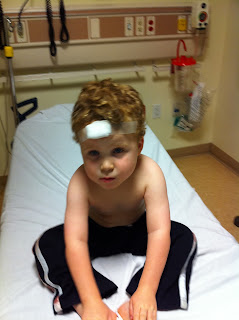 At that point, I was a little stumped. I didn't want to just put the kids in the car and run to the ER, since I felt like I needed to keep applying pressure to the wound. (At what point does a cut qualify as a wound?) After a minute, I ran for the phone, called Jeff and told him to come home. I also called my BFF, who was supposed to be coming in another half hour or so, to come right away.

Then I waited, holding Moe and the towel. After about 10 minutes, Moe did not want to sit still. He was not amused at the towel I still insisted on holding to his head, and kept trying to go to the table for a snack. Both Jeff and the BFF called, but between Moe's crying and the dog barking, I couldn't hear a thing. All I could say was "just come here." She arrived in about 15 minutes, and Jeff was right behind her. Apparently, he made some daring traffic moves right in front of a cop, but fortunately did not get pulled over.

By the time we got in the car, Moe had stopped bleeding, but it was pretty clear he was going to need stitches. He now has three of them. That story tomorrow...

Posted by Wantapeanut at 9:26 AM