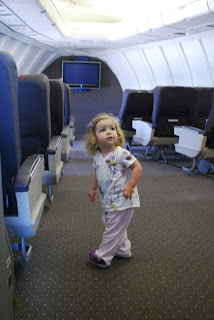 Jelly, now just over two years old, has become a little parrot, repeating everything I say. While I'm amazed at her pronunciation, this can be annoying, worrisome (possible echolalia?), entertaining, and a little dangerous. If I ask her a question, and she doesn't know the answer right away, she will simply repeat the question.

It's the toddler version of "Who's on First?"

Although neither Jeff nor I are especially big swearers, certain words do come out of our mouths that we'd rather our two year old didn't repeat. While it may be cute to hear Jelly say "Oh my goodness! So messy!" I'm a little less comfortable hearing her say "Berkeley, be quiet!" or "Moe, stop it!" When I got home from BlogHer, I had a temporary tattoo from the Aiming Low party, that said "Internets. Hell Yea!" For some reason I read this out loud, and Jelly immediately repeated it. And while my first thought was "quick, go get the video camera!" the mom in me quickly repeated "Oh yeah!" and successfully changed her tune.

Last weekend, the four of us went to the Hiller Aviation Museum. This is a pretty cool place for kids, and Jelly wanted to explore everything. One of the exhibits is the cockpit of a plane in which an attempted hijacking had been thwarted. I held Jelly up to see in inside and silently read the story.

Jeff was only mildly interested so I gave him the quick summary of what happened. The hijacker was suffering from black lung disease and was mentally ill, but I insensitively just said "he was crazy." Oops. Since then, Jelly has been saying "that's crazy!" I tried changing her to "that's silly" but this time, I was too late.

Fortunately, she didn't realize I was talking about a person, and seemed to think I was describing the airplane. So now, any time she hears or sees an airplane, she immediately shouts "that's crazy!" In this case, I think my choice of words worked out okay. I can't imagine a two year old shouting "that's mentally ill!" every time she sees an airplane.