Working Out Our PECS

On Wednesday, I dropped Jelly off at my BFF's house, and met Jeff and Moe up at Lucille Packard Children's Hospital. We were there for speech evaluation with a woman recommended by Dr. S, our developmental pediatrician. I was thankful we were at a satellite building of LPCH; I find it hard to walk through the hospital without having my heart break a little for all the sick children there. Even when I was arriving to deliver my own children, happy days both, I had to keep my eyes down.

I arrived first and filled out some paperwork. Jeff and Moe walked up and Moe, already holding Jeff's hand, reached up and grabbed mine with the other. He was apprehensive at the waiting room, despite the TV, toys and books. This hesitation is something new, and I think positive, showing a little more awareness and concern for where he is and what might happen. But Moe stayed calm, and we were shown back to a room.

The SLP we met is a specialist in augmentative communication, or communication without speech. She had already reviewed Moe's latest reports and IEP and knew his background. She worked with Moe in a few different ways, and we thought he did really well. A year ago, Moe would have spent much of the time trying to leave the room, grabbing us by the hand to open the door. This time, Moe sat at the table for the entire appointment, engaging with the SLP, making requests and taking turns when prompted.

Most of the readers of this blog should be familiar with the Picture Exchange Communication System, or PECS. If you don't know about PECS, the concept is simple: instead of speaking a word to communicate something, a picture, often a graphical icon, is used. So if Moe wanted to play, he could grab the "play" icon and hand it to me. This can be done more simply to give choices; for example, at school he might be asked to point to one of two or three icons representing which song he wants to sing at circle time. In a more advanced form, multiple icons can be used to form sentences: the icons for "I want" and "eat" can be put together, for example.

The SLP used a different form of exchange with Moe, using 3-D models instead of icons. She had beads in a clear box and balls in another box. These were used as models. She then had another set of beads and a ball in her hand. She gave Moe the ball and let him play. She then said "my turn ball," pointed to the ball in the box, then held out her hand for Moe's ball. He handed it back. She did this with the beads as well, just to get him familiar with the two toys. Then she waited for Moe to make a choice. He had to point, unprompted, to the item in the box he wanted, then he would get the real thing. He understood the concept quickly and we added in more items to choose from.  He started to tune out when there were 4 or more choices.


We then switched to pictures of the items, instead of the 3D versions in the boxes. Moe did okay with this, but not quite as well. He did better when the picture was held up at an angle, rather than flat on the table. We tried a few more variations with different types of equipment as well. Moe also did some nice verbal imitation playing with a microphone toy. 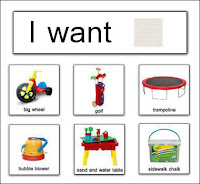 We haven't had a lot of success with PECS in the past. Although I know Moe understands the basic concept, we haven't gotten much past the pointing to a choice stage. We have had a little more success with sign language, but the motor planning required to make the signs is difficult for Moe. PECS has the benefit of being understood by anyone (the words are printed under the pictures), but can require carrying around a large PECS notebook. Signing is more portable, but not universally understood.

As part of our PRT work, we've also been phasing out signing with Moe in favor of verbal attempts and this seems to be working. Moe will almost always make a verbal attempt when prompted. This is not a verbal approximation; right now, any sound will do. But this week I am starting to require more of an approximation for a few words that have high value and are easy to say, like "up" and "open."

I was a little disappointed after the evaluation. Every time we meet with someone new, I'm so hopeful that this person will be the one to discover the key to Moe's speech. I want someone to be able to look at him and tell me, do X, Y, and Z and he'll start talking. I know it doesn't work that way, but I hope anyway. We are now able to come back to see this SLP, and it is nice to have another expert on the team.

The SLP did confirm apraxia of speech, meaning there are motor planning issues in addition to the issues of understanding social communication. This is not news, though I don't think has ever been in any kind of formal assessment before. She recommended we start with the 3D models, then move to photographs before using the graphical icons. We'll be spending the weekend getting set up for that. But primarily, she said to keep doing what we're doing. There is no easy answer here. Just time, hard work, and a lot of patience.

Posted by Wantapeanut at 3:53 PM