In a Jewish wedding ceremony, the rings are placed on the right index finger. As with everything Jewish, we don't really know the reason why, and we can bicker about it all day. Uncertainty is in our genes. We get around this by giving a few possible reasons, then getting something to eat and forgetting about the question.

The rabbi at last weekend's wedding described two reasons for this custom. The first is that moving the ring from one finger to another is a deliberate act. So, the groom places the ring on the bride's index finger and she moves it to her ring finger, signifying her willingness to enter into this marriage. Think of it as the ancient equivalent to "check here to agree to the terms of service." In fact, there seems to be a lot of emphasis in the Jewish wedding ceremony on not getting tricked into marrying someone. The reason for this is (surprise!) up for debate, but often refers to the story of Rachel and Leah.

The other reason we place the ring on the right index finger is that Talmudic rabbis agreed that this finger had the most direct connection to the heart. Clearly the more romantic spin on the custom.

Parents of children with autism understand the significance of the index finger. Pointing, or rather the lack of pointing, is a primary marker of autism in young children. When Moe was first being screened our pediatrician asked if he pointed at things, and we answered "Maybe? Sometimes?" Now that we've watched our typical daughter, Jelly, enthusiastically point at everything since she was at least 9 months old, we know that our "I don't know" should have been an emphatic "no." For her, pointing was a developmental imperative, one she worked on as vehemently as rolling over, crawling, and walking. 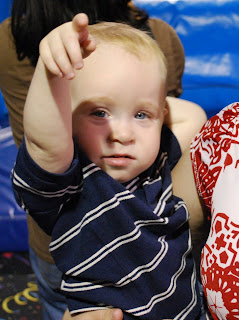 Every couple of months, I come across a set of pictures from a party when Moe was about 18 months old. He had just started walking, the only delay I had been concerned about at the time. In the photo, Moe is clearly pointing at the camera. And though I can remember hardly any examples of "shared attention" or other efforts to point out things he was looking at (other than a short time when he would point to body parts, letters, or pictures in books when we asked), I always come back to this picture. It was my "proof" that he was okay.

In some ways, this picture makes me hopeful. If Moe had this instinct to point at one time, it must still be in there. The "it" I'm referring to is not the pointing; rather, "it" is the typical boy I still sometimes long for and imagine, though I will myself not to. Somehow, knowing that Moe was once doing typical things helps me feel like he can get there again. I convince myself I'm not asking him to be something he never was, but just to get back to the way things were.

On the other hand, the fact that I have exactly one picture, one memory, of Moe pointing, is a real indication of how early the signs of Moe's autism were present. Despite the regressive nature of his autism, at least as far as language development, there were many early signs. And this realization tells me how, for lack of a better word, "deep" his autism runs. Though Moe will learn many skills, perhaps even the skill called "how to grow up, get a job, move out and otherwise get along in society," he will always and forever be autistic.

And if Moe's index finger is, as the rabbis say, a direct connection to his heart, what does it mean that he still, at age 4, doesn't point? If Moe doesn't share his experience in this way, doesn't see the point (pun intended), does this mean that he does not share his heart?

Of course there are other ways to share experience and to express love. For one thing, parental love is about giving without expecting anything in return. And if, as we say, Moe's autistic brain is wired just a little differently than mine, then maybe other connections are as well. If Moe's finger isn't directly connected to his heart, I can certainly tell you that it is connected to mine. As my fingers point, sign, squeeze, brush, hold, direct (and re-direct), I share Moe's heart every day.

Besides, I'm pretty sure for Moe, the most direct connection to his heart is his smile. Unfortunately, it's hard to put a ring on that.