My Cup Runneth Over

Last weekend I went to LA for a wedding. I first knew the groom as the little brother of one of my best friends from Hebrew school and then high school. A few years later, he and my brother became very good friends. Now, more than 25 years later, our families are, well, like family.

My parents have come to adore this bride and groom, and since they are local, spend time with them at Dodger games and other events. My dad expressed that this wedding, and the people involved, are important to him. He and my mom had the honor of signing the ketubah (Jewish marriage contract). 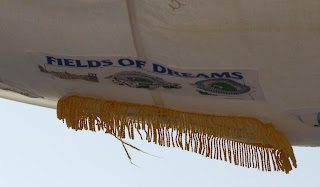 The ceremony itself was on the helicopter pad of a hotel in Marina del Rey, with a glorious panoramic view of the city, from the ocean on one side, sweeping around through downtown and beyond. The bride and groom stood under a custom chuppah (canopy), made from pieces important to them, including a shirt my brother got on a cross-country trip they took together to the Baseball Hall of Fame. As the chuppah flapped in the wind, I caught glimpses of the words "Field of Dreams."

But this weekend wasn't just about the wedding and old friends. It was also about making new connections. On Saturday morning, I had breakfast with my blogging friend, Cheryl from Little Bit Quirky. The time flew as we chatted about our kids, about our plans for the upcoming BlogHer conference in San Diego, and about the future of our blogs. I'm looking forward to spending more time with Cheryl; I just hope she survives Carmageddon. 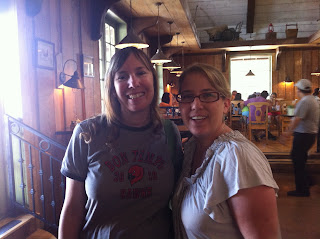 And then I met Kerry. Kerry is a frequent commenter on this blog, though not a blogger herself. She has a child right around Moe's age, who is also on the autism spectrum. Our kids are remarkably similar, and though we had never met before, we felt like kindred spirits. Kerry's husband was in the wedding, so I knew she'd be there early. She was by the door when we walked in, and we were inseparable from that moment. Kerry is a true warrior mama, kind and caring and fiercely determined to do everything she can for her son. We lamented the fact that we lived so far away, swore we'd find a way to get our kids together soon, and I know we'll be great friends always. 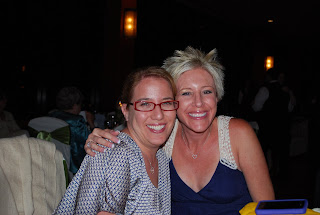 I also spent some time with my friend (the groom's sister) and her husband. She is very pregnant, and was given the day off from modified bed rest to attend the wedding. She had to take it easy (i.e. no dancing) so we had plenty of time to catch up. Yesterday she went into labor! I'm still waiting for word of the delivery. It's earlier than they had hoped, but still should be safe, and now I'll get to visit that little baby when I'm in San Diego in August!

I met or reconnected with a number of other wonderful people, friends of the groom's and of my brother's. I'm thankful that Facebook will allow me to keep in touch with them moving forward. The rabbi described the second cup of wine the bride and groom drink during the ceremony as the "cup of joy." Surely, my cup runneth over.

Posted by Wantapeanut at 7:41 AM