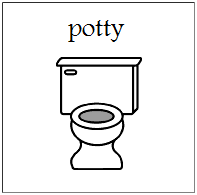 Yesterday was one of my most challenging days as a parent. I don't say this to be melodramatic or to ask for your sympathy. It is just a fact.

Moe has been taking off his diaper when he's home in the afternoons. A lot. Some of those times, his diaper is wet and I can tell he's just peed. Other times, he takes the diaper off then I find a little puddle somewhere. But he's also getting aggressive, kicking and scratching, when I try to put a diaper back on him. I don't know how to handle him when he's like that. So I decided it is time to start working on potty training. I devised a plan:


(Any South Park fans out there? Nothing? Let's move on.)

My plan was to take Moe to the potty every 30 minutes or any time he started to take his pants off. My hope was that if I could get him to go on the potty he wouldn't want to take off his diaper, and even if he did, he wouldn't make a mess in the house. Plus, we could start to build some positive associations with going on the toilet.

We started off strong. I sat Moe on the potty. He peed (we've done that before). He smiled, I cheered, and we were on our way. I set the timer for another 30 minutes. Twenty-nine minutes later Moe had his clothes off. His diaper was wet, but I put him on the potty anyway. He fought it, swiping at me and knocking my glasses off my face. So much for positive associations. So I took him off the toilet, but when I tried to put his diaper on, he put up a major fight. He grabbed at me. He pulled the dog's tail. I wrestled the diaper on him, got him dressed and put him in his crib to calm down.

You can guess what happened next. I skipped the next timer, which went off about 15 minutes later to find (obviously) a naked Moe, bed soaked. I took him out of his crib and pulled the wet sheets and blankets off. Moe was still naked but I wasn't too concerned because at this point he had peed at least three or four times in the last 45 minutes. I found him in the living room and - surprise! - he was peeing on the trampoline. I whisked him up and onto the potty, but, again, it was too late.

After giving Moe a quick bath, I got Jelly up from her "nap" (read: time singing and playing in her crib) and moved the party outside, potty and all. I let Moe be naked, hoping that I would be able to catch him when he started to pee, and quickly bring him to the potty. Easier said than done. Moe is a quick and stealthy pee-er. Splinter skill?

Two baths (Moe) and 17 Diet Cokes (me) later, feeling completely defeated, I called it quits and put Moe's back-zipper pajamas on. Moe did go on the potty a few times, but he also went on:
Who pees this much? Should I be worried?

And that was our first day of potty training. One down, so many more to go.

If you've gone through this, I could use your wisdom. Helpful suggestions appreciated!

Posted by Wantapeanut at 7:39 AM