The Faint Light At the End of the Tunnel 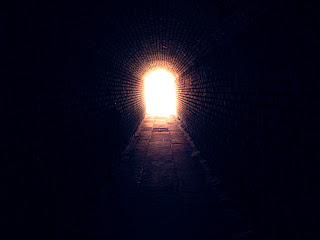 Originally written for Hopeful Parents, where I contribute on the 14th of every month.

We’ve been having a tough time at home. I’ve been hearing this a lot from parents lately, most attributing it to the hectic times of the holidays, with schedules interrupted, different people coming and going, and busy places to visit. My son’s teacher said that this time of year is always challenging because the kids have been in school a long time without any significant breaks.

Whatever the reason, my son Moe, has been having a lot more temper tantrums and meltdowns. He’s become sometimes sensitive to light, insisting on playing alone in his room with the door closed and lights off, piling his toys and books into his crib and burying himself under the covers. When he’s not in his boy cave (the three year old equivalent to a man cave), he’s over stimulated, chewing everything, spinning on a chair, splashing wildly in the bath. I spend a lot of time managing the extremes and trying to keep some level of calm in our house.

I am physically and emotionally exhausted. I feel like I did when I had a newborn in the house, tired, forgetful and distracted. When Moe was first born, the one thought that got me through that overwhelming time was “it will get easier.” I knew that I had to get through it, survive for a few months, but I was assured there would be a time when things would get easier. And sure enough, those feedings stretched out, Moe started sleeping through the night, and things did get easier.

But it was still hard. Everything was more challenging, even just getting in the car to go to the grocery store. Will he fall asleep in the car, jeopardizing an afternoon nap? Did he eat enough at the last feeding so I won't have to find a spot to nurse? Do I have everything I need in the diaper bag? But time passed, and once again, things did get easier. Then I had a second child and it started all over again. Now I had sleepless nights and a toddler. I had to learn all over again how to accomplish these same simple tasks, with new challenges like getting two kids in and out of the car, one of whom was (and still is) a toddler who would dash across a parking lot if I wasn’t holding securely to his hand. And then Moe wasn't talking, and there were doctor's appointments and assessments, and finally an autism diagnosis. I remembered how hard I thought it was when I had only one happy little baby. And I realized, that was the easy time. And it's over.

I recently wrote a post about a particularly rough day. Fellow bloggers and parents assured me that things will get better. I survive each day with this in mind. I tell myself that we will someday look back at these early years as the most challenging times of our lives. We just have to slog through it. But now I’m not sure. What if Moe’s behaviors don’t improve but he just gets bigger? What if this is the easy time?

I wish I could conclude on an optimistic note. I want to say that if this is the easy time, I will learn to enjoy it now, and then, if things do get better (which they probably will), I’ll be pleasantly surprised. But if things don’t improve, I’ve learned how to enjoy the moment we’re in. But honestly, I’m not sure how to do that. So right now, I’m just trying to survive, a day or even an hour at a time, believing that there is a light at the end of the tunnel, however faint.