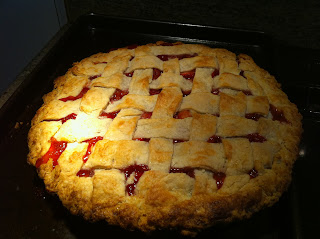 Sunday is finally here and that means school tomorrow. Hooray! I vaguely remember those days when long weekends were treasures and Sunday brought a little bit of dread for the week ahead. I experience the same thing now, only in reverse. I can't wait for Monday and for Moe to be in school.

Moe's vacation started Wednesday, so we decided to try a morning music therapy session at home. Our first two sessions had been after school at our therapist's home studio, about a half hour away. Both ended in meltdowns. This session went really well, with lots of engagement and some good imitation. We're not sure if it was the change in time or place that did the trick, but we're going to continue to do some experimenting with that.

Shortly after the session ended, my parents arrived from L.A. Jelly was so excited to see them. Moe wasn't quite sure what to make of the change and spent much of the day hiding in his room. With the excitement of the grandparents arriving and the beginning of the prep for Thanksgiving dinner, our schedule was a bit off. Moe had a huge meltdown that night in Chevy's and although he calmed down once his beans and tortillas showed up, and I calmed down once my margarita showed up, that pretty much set the tone for the rest of the weekend.

That night, Moe was up for a while in the middle of the night, something he hasn't done for a few weeks now. Thursday was a rough day for him, and he spent the day alternating between meltdowns or hiding in his crib, into which he threw a bunch of books and toys and made a cozy - though isolating - nest for himself. We didn't push him too hard to come out and be with everyone, but his mood put a damper on the day. Fortunately, Jelly relished all the love and attention she got from Grandma and Grandpa and was quite entertaining. They gave her new shoes and a doll stroller, both huge hits. She won my dad's heart by shouting "Pa!" the whole weekend.

Our thanksgiving meal was delicious, though the kids basically ate dinner rolls. We narrowly avoided disaster when our probe thermometer told us our tukey was done way too soon. But we trusted our guts, repositioned the probe, and the turkey was cooked perfectly, though a bit salty. Since we had brined the turkey, I decided to use a gravy starter for the gravy, but wasn't impressed. The entire dinner (inluding my chocolate pumpkin tiramisu), however, was upstaged by Jeff's strawberry rhubarb pie, which my dad went absolutely crazy for. A new Thanksgiving tradition has been started.

Moe slept well Thursday night but Jelly was up at 3am because clearly the kids think I don't ever need a full night's sleep.

The rest of the weekend had a lot of ups and downs. Moe had a lot of sensory overload this weekend, and I think my parents were a little surprised at both the frequency and intensity of his meltdowns. He's changed a lot since they saw him just a couple of months ago, and is no longer the easy-going mellow kid we had all gotten to know. He had some fun playing outside in the yard, went for a quick shopping trip with my mom and I on Friday, and even managed a few words, but for the most part, he was not at his best.

After my parents left on Saturday, Jeff and I did some thinking and figured out that Moe's worst moments are when he's tired and when he's hungry. Over the past month or so, we've worked a lot on the sleep schedule, and I think the excitement of the weekend was just a lot for him to process. But the real insight was whe we realized that our meal schedule at home was a little different than the one at school. We made sure Moe had meals and snacks on time yesterday and today and things were much better. We also started putting a piece of foam on Moe's door that keeps him from being able to go in and close the door. If he wants to close the door, he has to come ask for help, which he did a few times. We figure if his reinforcer is alone time, at least he should do something social to earn it.

It was great having my parents here and I know they loved seeing Jelly and Moe, even if he wasn't at his best. I'm glad we decided to have a small Thanksgiving at home this year. Friday night we brought in burgers, fries and onion rings. It went great with the leftover pie.

Posted by Wantapeanut at 3:27 PM