My iPad is Not Magic 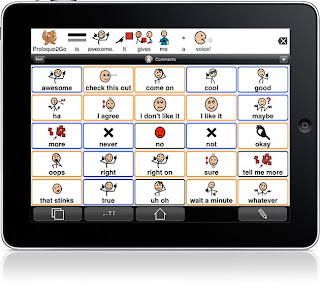 The internet has been abuzz (or, more appropriately, atwitter) with discussion of the 60 Minutes piece called "Apps for Autism" (watch the video here). Indeed I got many calls from people reminding me to watch the show, which I appreciated because I had forgotten to set it to record earlier that week. I was excited to see it and maybe learn some about some new apps I hadn't known about.

I enjoyed the piece, but I wasn't blown away. As someone who is pretty tech-savvy and who has been following the iPad as a communication tool for some time, the piece didn't tell me anything I didn't already know. And I had some issues with the content as well.

Let's talk about Josh, the 27 year old who was shown using the iPad to communicate quite adeptly, including answering interview questions and ordering food at a restaurant. I admit I did tear up a bit at the thought that my Moe may someday have a voice, even in electronic form. However, text to speech devices have existed for some time. Even without one, Josh was clearly able to use picture icons to communicate, yet they showed him spelling out words on a piece of paper for the interview. As Dana over at Uncommon Sense said, "Are we to believe that for 26 years, Josh has used only a (poorly) laminated paper keyboard, and then one day he got an iPad and it changed everything?"

And what about the little girl they were teaching to count? First they show her in front of a piece of paper with the numbers 1 and 2 printed on it. Big surprise! She wasn't interested. Would you be? Then they show her an iPad and numbers go scrolling by. The numbers got so much higher than 2! And that girl watched those numbers. But I didn't actually see anyone teaching her to count in either scenario. Yes, attention is a first step to learning, but nothing about that clip showed how a teacher or parent might use the iPad to teach someone with learning difficulties to count.

I did appreciate the teacher who said the iPad isn't for everybody. Moe doesn't yet have the attention, or the language skills, to use an iPad. He likes it - but he mostly likes to bang on it, which is why I got him a drumming app. He likes to push the home button (would somebody please make a way to lock it from inside an app?), which just takes him out of the app I'm trying to teach him to use. We've been practicing with the free version of a communication app called Sono Flex Lite, but I think the iPad may be simply too exciting for him. We have better luck with paper icons and velcro.

We have had some success with receptive language skills with apps like Sound Touch, and the Kindergarten.com apps (shown in the piece). Like the boy who loves opera, Moe seems to be able to identify more items than you would think. Moe has challenges not just with forming speech, but with all language and communication, and so just giving him another way to communicate is not the same as teaching him how to communicate.

Don't get me wrong. I think the iPad is incredible. It is expensive (and the Proloquo2Go communication app costs another $189.99), but it is much cheaper than, say, an $8,000 Dynavox. The iPad is small and portable and easy to navigate. And, perhaps most importantly, it is cool; there is no stigma in carrying around an iPad. So yes, for some people, and I'd imagine especially for people who have some experience with some of the clunkier alternate forms of communication, the device is life-changing.

But it isn't magic. There are a number of reasons for communication difficulties, and not all of them are solved by the iPad. And despite the message sent by the 60 Minutes piece, all autistic kids aren't born knowing how to use one. They need to be taught to use it, shown how it can help them, and for some it really does. For others, like Moe, it is just one more useful tool in our growing collection.