President's Week Begins with a Whine

When I was a kid, the calendar showed Washington's birthday and Lincoln's birthday, and I think we got one of them off. Then "they" (The ministry of holidays? The CEO of Hallmark?) created just one holiday called President's Day. It is an official bank and mail holiday, but it seems to be one of those optional holidays for companies so Jeff worked yesterday. And our schools are closed for the whole week.

In snowier climates, I think they call this ski week, but for me it just means Moe is home. Moe doesn't do well with unstructured time, so I tried to make some plans. I asked our babysitter to come for some extra time during the week so we could take both kids to some of our regular activities. But, fullfilling Murphy's Law of Vacations (that's a thing, right?), Moe got yet another cold

He's had a runny nose since last Thursday, but otherwise seemed fine, so I wasn't worried. We had a nice weekend, visiting the Body Worlds Vital exhibit at the Tech Museum (the kids are still young enough to not be freaked out by it), and the farmer's market the next day. But Sunday night, Moe had a lot of trouble sleeping. He was up pretty much the whole night.

Now, I've been here before, canceling our activities because of a sleepless night only to spend a very long day at home with two kids bouncing of the walls. So I kept our plans, and our babysitter came and we took both Moe and Jelly to music therapy. Moe seemed fine and was giggling and laughing before we left.

About 10 minutes before we got to music therapy, right as we got off the freeway, Moe started crying. It didn't stop. For the rest of the day. It varied from a pathetic whine to all out screaming, but it was pretty much continuous. The funny thing was, despite the tears, we had a really good music session. Moe wasn't running all over so he actually participated, making choices, following directions and imitating. He played the piano with really excellent rhythm. And Jelly, who doesn't usually come to music therapy, was the perfect "typical peer," modeling everything. Moe has been really been taking cues from Jelly lately, so it was great having her there.

Moe was relatively calm by the end of the session but once lunch came, he was a mess. I think he has a sore throat, so he was probably hungry but not wanting to eat much. I had given him Motrin in the morning, so I couldn't give him any more for a couple hours. So I really had no idea what was wrong. He'd whine, push me, not away but toward something, but he wouldn't lead me all the way to anything so I'd have no idea what he wanted. I tried to put him down for a nap, but he didn't sleep. Jelly didn't nap either. 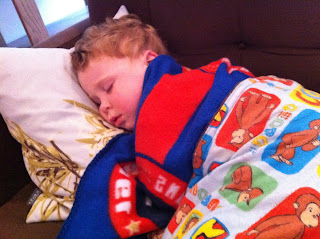 Around 3:00 I wrapped him tightly in a blanket and put on Sid the Science Kid. He cried until he put his head down on the pillow. Around 4, he fell asleep, finally ending the whining and crying.

Until he woke up an hour later. Both kids were in bed by 6:30, and I was thankfully able to go to a new Zumba class. Fortunately, Moe slept through the night. This morning has had its ups and downs so far. We're going to stay home all day. Wish me luck.

Posted by Wantapeanut at 9:04 AM