A day at the beach

This past weekend, we visited some friends who have been renting a house in Capitola, a great beach town near Santa Cruz, CA. It is an easy drive there, and the beach is such a fun place for kids.

Moe loves the water. Splashing in the water table in the backyard is one of his favorite activities. He is happy as can be in a swimming pool and bath time is such a fun activity that we’ve been trying to correlate whether taking a bath before bed actually makes sleeping harder for Moe. So it was no surprise that he absolutely loved the ocean. 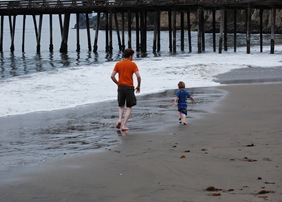 When we got to the beach, Moe immediately took off running. There was so much sand and space! But when he finally saw the ocean, he knew where he wanted to be and made a break for it. He absolutely loved splashing in the water. Unfortunately, he has no sense of danger at all so one of us (usually Jeff) had to be by his side every second. As Jeff put it, if given the  chance Moe would just run straight into the water and keep on running until he drowned.

Capitola is cloudy in the mornings and it was only about 60 degrees out. When we finally dragged Moe out of the water for a snack, he was shivering, 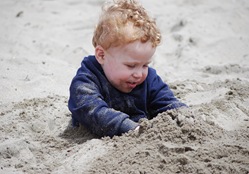 trying to wrap the towel around himself as tight as possible. We got him dressed and warm, but as soon as snack was done, he wanted right back in the water. We spent the rest of the day chasing him, making sure he didn’t get soaked. He only sat still when he was eating or when we buried him in the sand (which he quite enjoyed). This seemed, at first, like a brilliant plan, but didn’t keep him still for very long. 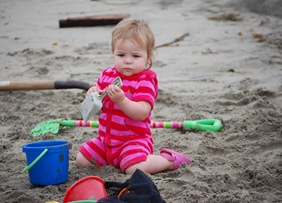 While Jeff was chasing Moe, Jelly was digging in the sand and just looking completely adorable. She played ball with Grandma and Grandpa, noticed all of the birds, and generally got very, very sandy.

As I mentioned in my last post, going anywhere with Moe has its challenges. I want to take him places, not just because I want him with us, but also because I think it is important for Moe to learn about the world. He needs to see how other kids play and act, and learn what is expected of him even at the beach, a place where it would seem very little is expected of you. Overall, it was not the most relaxing day on the beach, nor did I expect it to be. Moe deserves a chance to have his own kind of fun, and if this isn’t pure joy, I don’t know what is. What more could a mother want to give to her child? 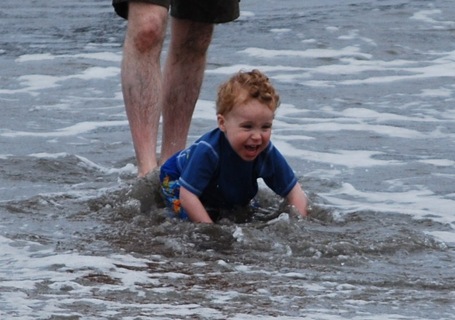 Posted by Wantapeanut at 1:30 PM