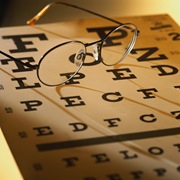 I’ve been teasing Jeff for a while about how he needs glasses. He didn’t want them, thinks he’ll become dependent on them and that his eyes will get worse. Then one day we did a little at-home eye test. He realized that I, with my glasses, could see better than he could. A couple weeks later he came home with a minor prescription, and we picked up his first pair of glasses last weekend.

I remember the day I realized I needed glasses. I was in high school, in history class, with a teacher I didn’t particularly care for. I was a great student, but for some reason was always getting into trouble in that class. Once, she told me I was at the center of the sewing circle. Another time, she told me that it was “the quiet ones you have too watch out for.” I don’t really know what she meant by either of those, but apparently she thought I was a girl from the 1800s who might become a serial killer. But I digress.

Anyway, this teacher had very looping cursive handwriting and I used to have trouble reading the board in her class. I could usually make out just enough to get a sense of what she wrote, but never the whole picture. My best friend in HS had just gotten glasses and I tried them on to see what they would look like. I’m pretty sure they were pink plastic frames. Very cute (for the 80s). Lo and behold! I could see the board. About a week later, I got my own very cute, very 80s, new glasses. I’ve worn glasses every day since.

As Jeff has been marveling at how much clearer things are with his new glasses (which he looks very cute in, by the way), I’ve been wondering if that is what it is like for Moe. Maybe the world is just a bit fuzzy for him around the edges. I don’t mean that he has poor eyesight, but that maybe he isn’t always sure what he’s looking at. Moe sees what we see, hears what we hear, but can’t quite make sense of it all. If only I could get him a pair of glasses to help him see things a bit clearer. I think Moe would be amazed by the world has to offer.

Posted by Wantapeanut at 3:21 PM