Back to school and dreaming big 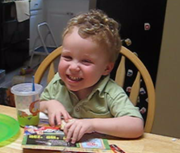 The alarm went off at 7:00 this morning and my heart skipped a beat. Today is Moe’s first day back to school!

Many of the kids in Moe’s old playgroup will be starting preschool this year. I’m looking forward to seeing the pictures of them in their new school clothes, backpacks on and lunch boxes in hand. For Moe, this is old hat. He’s been going to school off and on for over a year now. Although there were some tears at drop off today, as soon as he saw his old classroom, he was all smiles. His teachers greeted him with big hugs.

This is a really important year for Moe. Last year was a really important year too, and it didn’t go as well as I had hoped. It took a few months for us to find the right program. And when we did finally get him the right type of therapy, I had such high hopes for the progress he would make. I imagined that at the end of a year, he would be connecting, talking, communicating. Maybe he’d still have some social issues, difficulty with play and imitation, but he’d be getting back on track. Moe did make progress, but quite honestly he’s not where I wanted him to be. I don’t think we made any mistakes, and there are only a few things I might have done differently (knowing what I know now), but developmentally, he just wasn’t ready to do what I hoped he would be doing, especially in language development.

So here we are. Moe is three and not talking, though lately it seems as if he may be trying again. He’s back in our public school’s preschool autism program, which he attended for just a total of 6 weeks at the end of last year and during the extended school year. Today, we’re starting fresh with a great program and wonderful teacher and again I have such high hopes. I’m afraid to wish for too much so I’m not disappointed – no, heartbroken – again. Jeff reminds me that we have to hope for it all, because what else would we do? Hope for less? If there is one thing I’ve learned, it is to never set the bar too low.

At work, we would always set some stretch goals for a project. These were the tasks we hoped to achieve, but that were probably slightly out of reach. In the striving for them, however, we probably accomplished more than we would have without them. So this year, I will let my hopes and dreams for Moe stretch as far as as I can imagine.

Posted by Wantapeanut at 1:05 PM