Jelly Belly is such a fun, animated, hilarious little baby. I’m trying to enjoy her for who she is, without constantly waiting for the other shoe to drop. I found a picture of Moe the other day. In it, he was pointing, something kids with autism typically don’t do, and that I probably happened to catch the one time he did it. But I was reminded that things can change.

Jelly is showing all of the signs of typical development, except she isn’t walking yet. She is 14 months old, still within the normal range. But Moe was a late walker, and looking back that could have been an early sign. Late physical development is not a sign of autism in and of itself, but many kids with autism also are late walkers. Moe walked at almost 18 months.

So far, Jelly is so engaged, pointing at everything all the time and is really starting to talk. In those early assessments with Moe, we were always asked questions like “Does he show pride in his accomplishments?” and “Does he check for your reactions?” We had no idea what that even meant. Now, we get it. Jelly waits for you to clap for her when she’s done something, like put a lid on a pot or stack a block. If something is loud or sudden, she looks at me to see if all is okay. Moe never did any of that. Most importantly, she is communicating. She doesn’t just label things for the sake of doing it, she’s making sure we know that she knows.

It is hard to know what words she really knows and what she is just imitating, but right now Jelly says banana (“na!” with sign), dog with sign, book, bird with sign, flower, apple, up, fish (with sign) and bear. She’ll also say swing, monkey and cat, grandpa and grandma in imitation. She’s not too into saying Mama and Dada these days. (Though she literally JUST said Dada as I typed this so I’m probably just being paranoid.)

Our other favorite thing Jelly does is dance. She be sitting in her high chair at a restaurant bouncing up and down to the beat. It’s the cutest thing ever. Trust me. 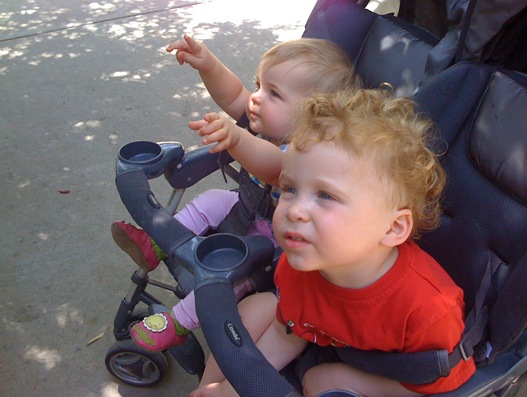 Posted by Wantapeanut at 9:06 AM