Today is Moe's fourth birthday. I'm amazed at how quickly the time has passed this year. One year ago, Moe looked like this: 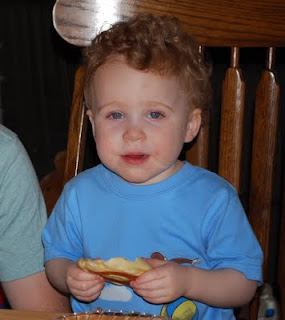 He hadn't started school yet. We were just finishing up one of the longest, toughest years. It was the year of diagnosis. The year of in-home ABA. It was Jelly's first year of life. 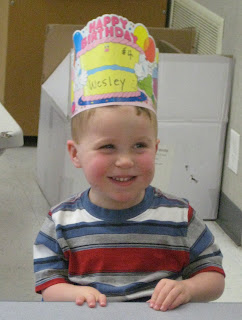 He's still a peanut, but he's growing and changing. Although I don't know how much of the concept of a birthday he understands, Moe was genuinely excited at all of the special attention he received today. When I woke him with "Happy Birthday!" this morning, he greeted me with huge smiles and giggles. He was excited opening presents for the first time ever. And he clapped with joy when the class sang Happy Birthday to him.

But some things never change. Moe ate his cupcake with abandon. And then he stole his neighbor's cupcake. And then he ate half of mine. And then he had cake after dinner. The boy has always loved cake.
Moe had a great day. And it fills me with joy to know that he felt extra special today, even if he doesn't completely understand why.

But now, as I listen to him playing in his crib, giggling and squealing, I'm starting to regret allowing him quite so much sugar.

Posted by Wantapeanut at 8:06 PM