We went to an open house last weekend. It's in the neighborhood we want to live in, just blocks from the house we used to rent. It's an historic home, completely renovated. The master suite has a sitting room almost as big as our current bedroom. The upstairs bathroom has a claw-foot tub. And the kitchen looks like this: 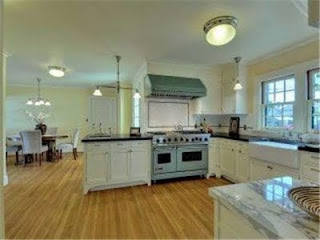 It is our dream house. One I can picture growing old in, hosting book clubs and birthday parties and thanksgiving dinners. Figuring out ways to keep our teenage daughter from sneaking out of the upstairs balcony. The yard is lovely.

But the dream house is not in our current school district. If we bought this house, we would have to change Moe to a new school, something we said we absolutely would not do until he was ready for kindergarten and would leave his current program anyway.

But this house. Just look at this bathroom. 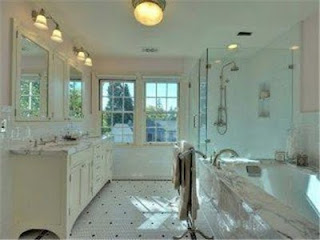 So we asked ourselves, could we? Could we take Moe out of the school with the teachers we love so much? The other school district is good, arguably better, at least for general education. Who's to say the new program wouldn't be even better than the one we lucked into here? So we're researching. Asking around. Thinking about it.

The truth is, we can't afford this house. But if the stars aligned just right, and the sellers lowered their asking price and we stretched a little, maybe we could. But probably not. But you never know. For now, we're just watching and waiting, hoping and dreaming, and asking ourselves: could we?

This post written as part of Jenny Matlock's Alphabe-Thursday. Today we are on the letter C, which in this post could stand for "Could we?" or my alternate title, "Chef's Kitchen."