This month, for From Left To Write, we read a memoir called The Kids Are All Right

. This book is not the same as the movie that recently came out by the same name; rather, it is a memoir written by four siblings. In it, the siblings, in rotating chapters, tell the story of their early childhoods, through the deaths of both parents, and into their adult lives.

If you've read other posts for From Left To Write, you know that we don't do book reviews, but instead write posts inspired by the book we've read. This book inspired me over and over, touching on topics from parenting style to legal guardianship for your children, eighties music and fashion to the importance of family wherever you can find it. But ultimately, this book is about siblings, and this book reminded me over and over of my relationship with my brother. He was my one and only sibling, and he died in 2002.

I don't write about Billy very much on this blog, but he is in my thoughts daily. His absence in my life is painful, but his presence is powerful, especially in the little things. I remember once, as kids, talking about our favorite time. Mine was 11:11. He said his was 12:34. I smile whenever I catch "his time" on the clock.

My brother and I shared a sense of humor, and an unspoken connection. It has become family lore that we were unbeatable at Pictionary. We both went to Cal, and enjoyed many Berkeley dinners together on mom and dad, as the deal was that they would pay if we went out together (a tradition I hope to pass along to my kids someday). And we shared similar taste in music.

The Kids Are All Right is filled with mentions of the mix tapes they made. If you visit the incredibly cool website for the book, you can watch some iconic seventies and eighties music videos and hear the iTunes playlist they set up. There, the authors comment, "While writing this memoir, we realized just how important music has been in our lives – so many of our memories involved specific songs." 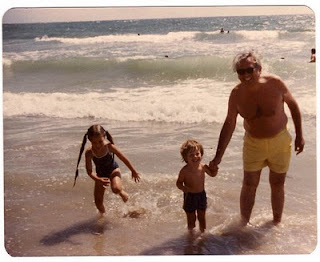 My brother and I were almost four years apart, but despite our age difference we got along really well, especially as we got older. One thing we shared in common was our music. Our tastes were slightly different. My favorites were Depeche Mode, The Smiths, and The Cure. He loved the Red Hot Chili Peppers, Rage Against the Machine, and Smashing Pumpkins. But we had a lot of overlap, and there was a lot of music that we listened to together. Some of our favorites were James, Oingo Boingo and Barenaked Ladies. Like the siblings in the book, we made mix tapes for each other, or copied CDs to tape whenever one of us bought something we thought the other would appreciate.

After my brother passed away, I made him one final "mix tape." I actually bought a CD burner so I could make this for the funeral. We brought it and played it as people were arriving for the service. Making the CD was something to do to get through the first few days of grief, but I know he would have appreciated the mix.

The photo above is me, my brother and my grandfather, Pop Pop Dave, on a Southern California beach around 1979-80.

I was given the book, The Kids Are All Right, by the publisher free of charge and with no obligation. The opinions expressed here are my own.

Posted by Wantapeanut at 8:38 AM

Email ThisBlogThis!Share to TwitterShare to FacebookShare to Pinterest
Labels: Billy, From Left to Write