An hour of utter chaos

When I need suggestions from friends, I go to Facebook. It is a great way to ask a question to a lot of people, most of whom know me fairly well, all at once. This isn't always a good strategy. When searching for hobby suggestions, both "vodka" and "sniper" came up as popular suggestions. But on Wednesday, I posted the following question:


What do you do to get through the post-dinner, but before dad gets home crazies?
This hour of the day, from about 5:30-6:30pm is really challenging for me. The kids are getting tired from the long day, I'm tired, and we're all (including the dog) at that point where slap happy could turn into a meltdown at any moment. This is the time of day when Moe, quite literally, starts climbing the walls.

I will often put the kids in the stroller and take them and the dog for a walk. But this week, it was too hot: 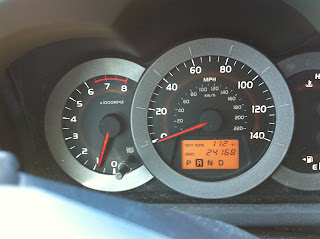 I got some good suggestions. My favorites were the ones reminding me to let the kids get messy: shaving cream play, pudding play, sand & water play. These are all activities we've done, of course, but a great reminder that Moe probably could use some sensory input around that time.
So yesterday, I was armed and ready. Moe had woken up pretty early so I knew it would be a tough evening. Sure enough, at about a quarter to six, he starts getting pretty manic. Giggling, running up and down the halls, chewing everything. I first tried to do some jumping with him on the exercise ball. This worked great, but of course Jelly wanted a turn. If I put her on the ball, Moe runs away. If I don't, she cries. So I decide it's time to go in the backyard.
BAD IDEA.
As soon as I say the word "outside," the dog goes nuts, running, licking me, barking in my ear (and this is her on Prozac). With all of the chaos, I can't get Moe's shoes on, so I just let him run. I try to get him in the swing, usally a favorite and great calming tool, but he doesn't want it. So I start to fill up the water table.
While I'm getting the hose out, Moe darts over to Berkeley's potty area along the side of the house - the one place in the backyard he's not supposed to go. He's barefoot. I run over, scoop him up, and bring him to the water table.
He then starts trying to drink the water out of the table. "Not for mouth!" I yell. So Moe runs. But as he does, he grabs a handful of sand and puts it in his mouth. Ack! Wait, where's Jelly? I do a quick scan. She's safely playing in the playhouse, but, shit! (literally) Moe's back in the dog poop. Once again I grab him and take him out. At some point, I call Jeff and ask him to please get home as soon as possible. Now the dog starts barking and scratching at the neighbor's dog on the other side of the fence. As I'm dealing with her, Moe runs back to the water table, which he proceeds to climb into. As I take him down, he falls on the grass, which he tries to bite, and then starts grinding his teeth. As I run in the house to get a chewie, Moe darts back to the poo area, which this time, he steps in.
So now, I somehow have to get both kids stripped down, back inside, and in the bathtub (one at a time because Moe does not like it when Jelly is in his bath). By the time bath time was over, I was drenched, physically and emotionally. As I write this story, it sounds funny, but let me assure you, it was not. Moe was completely manic. He could not stop running, giggling, squealing. Usually he can calm himself in some way, by rocking on a chair or going into his crib, or I can calm him with squeezes or back rubs, but he was truly out of control. I know the idea is to avoid letting him get into this state in the first place, but that isn't always possible and I was actually a little scared. Right now, I could still put Moe in his crib as a safe place if I needed it, but happens when he's 5, or 7, or 13?
Around the time Jeff got home, Moe was sitting quietly reading a book. Of course.