About a week after my son was born, some friends came to meet the new baby. Carla, who also had an infant, made herself comfortable in an armchair, threw a blanket over her shoulder and started nursing. She looked at me, smiled blissfully, and said “wouldn’t you just jump in front of a bus for him?”

I didn’t want to admit how tired and frazzled I was. Everything, including that “natural” act of nursing had been a challenge. While not exactly opposed to being a mother, I hadn’t quite warmed up to the whole thing. I nodded my head and said something along the lines of “uh huh.”

My transition into the joys of motherhood took a little while. But I did adjust. I learned how to click the infant carrier out of the car and into the stroller. I wore my baby to the grocery store and stocked the freezer with homemade organic purees. My son and I went to play dates and music classes and at four months to the day we began sleep training. And soon enough, I loved my chubby baby with jump-in-front-of-a-bus ferocity.

And then, just about the time that I was comfortable enough in my role as “mother” to have a second child - six weeks after that second child was born, in fact - a woman with a white coat and distinct Canadian accent looked at me and said “your son has autism.”

Once again I found myself not quite sure how to feel. Only this time, I had no time to get used to the idea of being a special needs parent; there was no “transition” about it. While there was no denying the diagnosis—the signs had been building for months—I couldn’t quite make sense of the words I had just heard.

There is an essay often given to parents of newly diagnosed special needs kids called “Welcome to Holland.” In the essay, you prepare for a trip to Italy. You read up on the culture, pack the right clothes, even learn some of the language. You board the plane. And when you disembark...you are in Holland. Holland is a beautiful place, with windmills and tulips and lovely people. But you were supposed to go to Italy. Pasta! Gelato! Buongiorno! And now you see only wooden shoes and salted herring.

After Moe's diagnosis, my son seemed a stranger to me. Though people told me “he’s the same child he was before the diagnosis,” it certainly didn’t feel that way. In a single instant, he went from a happy, mellow toddler with some speech delays to a kid whose entire future was uncertain. Would he ever speak? Have friends? Go to prom? Yes, in those first days, I thought about high school prom, that silly yet quintessential hallmark of adolescence.

Even the terminology sounded all wrong. How do I describe my son? What reason do I give when I explain that we can’t go to playdates anymore because Moe has 25 hours a week of therapy? I practiced when I met new people. “He has special needs.” “He is developmentally delayed.” “He has autism.” “He is autistic.”

I started reading blogs by people who called themselves “autism moms” or “special needs moms.” Was that me? I mean, I don’t have the special needs. “Mom to a child with special needs” was just unwieldy. They were accurate, but nothing felt right. How could this possibly be my life?

And all the things people said to make me feel better only made me angry.

God only gives you what you can handle.
Everything happens for a reason.
Special kids go to special parents.

I resented all of it. They say that people with autism have difficulty with transitions, but I was the one who couldn’t accept this new role. I didn’t want special. I didn’t want different. I just wanted my son back.

I spent hours looking for cures, researching diets or methodologies that would help my son “recover” from autism. I read blog after blog about kids who accomplished so much more than experts said they would. They graduated from college. They got married. Some of them even went to prom! And every so often, Moe would do something so “normal” that I knew in the core of my being that he would be okay. That he, too, would be a success story.

In the four years since Moe's diagnosis, I’d like to say that things have gotten easier for us. I want to share with you that story of amazing progress, of undiscovered talents or remarkable beauty. But that is not our story, at least not yet. In many ways, things have gotten harder. My son, who is approaching six years old, doesn’t speak. He is not toilet trained, can be aggressive and often goes for weeks without sleeping through the night. His disability and behaviors became so challenging last year that we pulled him out of school so he could return to a full time in-home therapy program.

But some transitions happen no matter how hard we fight them. I am no longer a tourist in this foreign country. I know the terminology, able to throw around acronyms with the best of them. I have learned to speak Dutch, as it were. I have become adept at advocating for Moe's needs and have immersed myself in local and online communities of special needs moms, some of whom have autism themselves.

I am no longer trying to cure my son or make him into the “normal” child I expected to have. I wear proudly the title of autism mom, just as I want Moe to grow to be a proud autistic adult.

I am Moe's mom. It is a special role indeed. 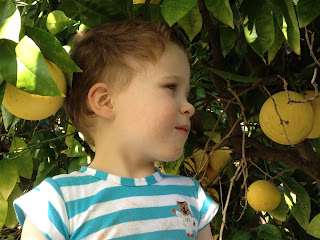 Posted by Wantapeanut at 3:55 PM