"You were strangers in the land of Egypt."

Passover was just a couple weeks ago, and I am always struck by the way we celebrate the exodus from Egypt. During the seder, we eat foods that remind us of the hardships suffered when the Jews were slaves under Pharoah. We do this not just as a recreation, but because we too were slaves. Not our ancestors, not people thousands of years ago, but us. We were there.

It is like this when you have children. I've heard it said that being a mother is like having your heart walk around outside of your body. When Jelly goes to school, she takes a piece of me with her. I am only whole again when she returns.

Jelly wears her heart on her sleeve. When she cries, or is frustrated, when she talks about her friends and what she's doing at school, my emotions go with her. As she grows, and faces the trials and tribulations of childhood, I will ache and rejoice with her; not only because I've felt those same things before but because I am her, and she is me.

When Moe is frustrated or anxious, when he is unable to communicate, I am frustrated too. I feel his struggle as if it were my own. When he smiles at me, or holds my hand, my heart is lifted. When Moe needed stitches, I felt his fear. I felt his pain as the needle pierced his skin. I knew I couldn't take the pain from him, but I could share it.

But with Moe, it is complicated. I don't really know how he experiences the world. When he flicks his fingers in front of his eyes, what does he see? What is it like when he struggles to speak? How does he feel when he is so unable to regulate his body that he slams himself into the wall, or comes full force at me while biting a pillow?

How does the world look to him? Sound to him?

I may never know.

Even though our brains are wired differently, he is still my son, a part of me.

He is my heart. 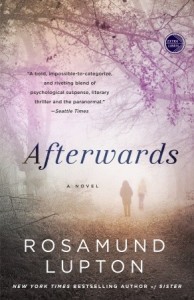 This post was inspired by the novel Afterwards by Rosamund Lupton. After witnessing her children's school set ablaze, Grace attempts to find the arsonist as her teenage daughter lies in a coma. Join From Left to Write on April 11 as we discuss Afterwards. As a member, I received a copy of the book for review purposes.