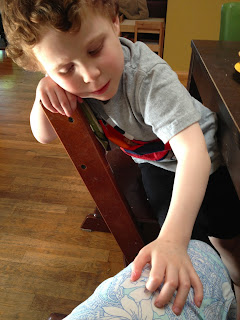 It's been a hard few weeks. Really hard. Moe hasn't been sleeping. He's dysregulated and aggressive. He bit 3 people and has scratched the hell out of my arms. On top of that, we got the final report back from his latest psych assessment. I won't bore you with the details but it is always hard to see the numbers that compare your six year old to a toddler. These numbers aren't supposed to bother me any more. But they do. Of course they do.

There were good things too. Jelly turned four, and we had her birthday party. I decorated her room with fairy decals while she was at school. I made cupcakes for the party. ("How to Make Fairy Cupcakes, Part 2" will be coming soon. See here for Part 1.) She had a great time. But Moe had a hard time at the party, and Jeff spent much of the time managing him. It put a damper on things. I try not to be resentful.

We had our last rehearsal for Listen to Your Mother and it was nothing short of wonderful. The show is going to be great. I'm getting more blog traffic and opportunities since being selected as one of Babble's Top 30 autism blogs of 2013. And yesterday, I had a job interview. I'm excited about it. I don't know how it will go--it is always so hard to interview over the phone--but it made me realize I do have choices. There is more for me yet.

This autism gig is hard. But as I think about many of the good things in my life--friends, this blog, the opportunity to read something that I wrote in front of a live audience--I am realizing that many of these are not despite autism but because of it. I focus a lot on the opportunities that Moe, or more accurately, Moe's disability, have taken away from me and my family. But there are good things too. 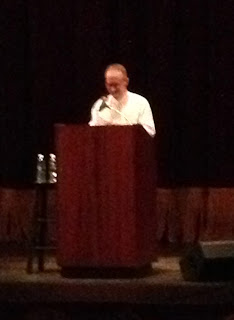 Jeff and I had the opportunity to see David Sedaris live on Monday. Moe was melting down as we were leaving and I was stressed about leaving him, even in the very loving and capable hands of my BFF. I wasn't worried about him as much as the idea of putting her through one of his meltdowns. He was overtired, so we gave him his melatonin early and went. We needed to go out together, to do something normal. We needed some fun, to prove to ourselves that even when things suck, we can still go out and laugh. It felt good.

When Moe is on a down cycle, there isn't much we can do but ride out the storm. It's an appropriate analogy, because much like the weather, these cycles will always come and go. Sometimes I don't recognize myself anymore, I am so steeped in this life of special needs. But I am slowing figuring out how to carry on, to reclaim myself, rain or shine.
Posted by Wantapeanut at 12:31 PM