Knowing Me, Knowing You

How many times have I said "if only I could get inside Moe's brain for a day?" When my online book group, From Left To Write, announced we were reading "Raising Cubby: A Father and Son's Adventures with Asperger's, Trains, Tractors and High Explosives," I jumped at the chance to read a book written by an adult with autism. (I have also read John Elder Robison's first memoir, Look Me in the Eye.)

I have very little insight into how Moe thinks and feels. His processing of the world must be so different from mine. I imagine it is based much more on sensation and impulse, that he thinks, as Temple Grandin puts it, "in pictures" rather than words. How does the world sound to him? Look? When he covers his ears when the wind blows, is it because the sound hurts him? Or does he like the way it sounds when he covers his ears, just like he seems to enjoy laying on his back in the bath with his ears just below the water? I can only guess.

I know how Moe behaves in certain situations. I have a general sense of how Moe communicates his needs, what his various sounds and gestures mean. We make it through each day, somehow piecing together each other's demands. Clumsy as it is, it usually works. But sometimes there are things I can't puzzle out. Is he frustrated? Not feeling well? Hungry or thirsty or cold? Sometimes, he may himself not know; he is only five and still developing emotionally. But sometimes, I know he's trying to tell me what he needs, and I can't figure it out.

Reading the words of autistic adults can help. In many ways, they are perfectly suited to explain how it feels to have different sensory processing needs, why eye contact can be so challenging, or how to calm a restless body and mind. I do my best to listen. As Moe grows older, I hope that we will find some autistic adults who can help him understand his body and mind in a way I cannot.

But the thing that struck me most about this book, is how little the fact that John Robison had Asperger's seemed to help him raise his son, who was also later diagnosed with the same disorder. Although Robison suggests that some of this lack of insight may have been because he has Asperger's himself, that isn't the whole picture. The fact is that Cubby (the nickname Robison gives his son) is very different from his father. Cubby is outgoing and smart, but disorganized and has difficulty with executive functioning skills. He has some obsessive compulsive behaviors, like hand washing and hair brushing. John, on the other hand, struggles more with social behaviors. Both father and son have Asperger's, but it doesn't necessarily bring them much closer to understanding each other.

Sometimes we neurotypical (i.e. not autistic) parents of autistic kids are made to feel that we cannot possibly understand our autistic children. That the therapeutic approach many of us take to helping them succeed is inappropriate. That ABA methodologies are nothing short of abusive. These words sting--how could they not? We are told that others know better what our kids need.

I don't believe it.

Moe's autism is uniquely his. And while some of his experiences may very closely resemble the experiences of some other autistic people, others experiences may more closely resemble my own. He loves to have his feet rubbed, for example. So do I. Some people hate to have their feet touched. This probably has absolutely nothing to do with autism, but there is no way to know where the line begins. Moe's primary area of need is with language and communication. I can look at other people with autism and see how they have learned to communication, but those methods won't necessarily work for Moe.

In the end, we each have a unique perspective on the world. There are a billion factors involved, and who says who might understand Moe best? All I know is it is my job to try, and one I do with love and the best of intentions every single day.

This post was inspired by Raising Cubby: A Father and Son’s Adventures with Asperger’s, Trains, Tractors, and High Explosives by John Elder Robison. Parenting is a challenging job, but what challenges does a parent with Asperger's face? Join From Left to Write on March 12 as we discuss Raising Cubby. As a member, I received a copy of the book for review purposes. 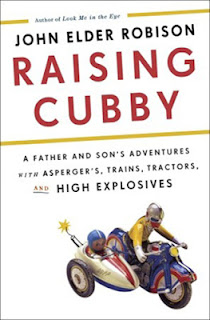