They Are Each Other's 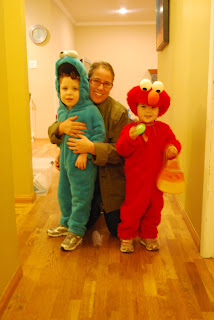 Jelly stayed home from school a couple of days last week. The runny nose and cough that had been making its way through her preschool classroom finally caught up with her. And though she protested "I'm not sick!" I kept her home.

Despite her cold, she was in my room at exactly 7:04 am, as she is every day. The clock by her bed lights up at 7:00, letting her know that it is okay for her to come get me. Our clocks are, it seems, four minutes apart.

Shortly after, I heard Moe stirring in his room, and Jelly wanted to come with me to wake him up. This isn't something she usually does. Moe likes to sleep in, and his home program allows him to do that. By the time Moe gets up, Jelly is dressed and eating breakfast, sometimes already off to school. Moe also likes to wake slowly, and Jelly's exuberance in the mornings can be a bit much for him.

But that morning, I let her come with me. We discovered Moe out of bed and lying on the floor, snuggled up over the heating vent. He had even brought his pillow with him and looked quite comfortable. I wasn't sure he would enjoy an invasion by his little sister.

Jelly is a little afraid of Moe these days. He has pulled her hair a couple of times. This is not an act of anger or aggression, but comes from overexcitement mixed with a lack of impulse control and understanding as to how to interact with this increasingly interesting little person. But Jelly doesn't quite understand that yet, and it doesn't make it hurt any less. So when Moe is agitated or running a little wild in the house, she gets frightened.

I decided, then, to let Jelly go to Moe. She laid down next to him, sharing his pillow. She crawled under a portion of the blanket. I positioned myself near them, ready to intervene if necessary, but held back. Jelly held out her hand to him. "Give me five, Moe!" she said gently. He did. She giggled and held out her hand again. He touched it briefly, palm to palm. They did this several times, back and forth. Sometimes he initiated by raising his hand to her, and other times, Moe would give me his hand. I gave him the palm squeezes and scratches I know he likes when he first wakes up. But Jelly would inevitably raise her hand again, and Moe would respond. 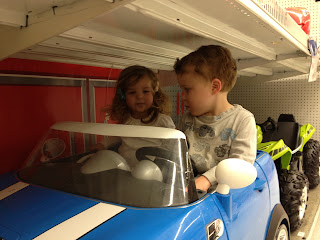 I have spent many hours pondering how best to forge a relationship between Moe and Jelly. But they seem to be doing this all on their own. Jelly watches Moe's ABA sessions, and can run programs. She listens to how we talk with Moe and does the same. She is insistent on giving him things that he likes. One time they dumped out a big bucket of farm animal toys and she handed them to him, one by one, and he put them back in the bucket. Though a simple exchange, the enjoyed the interaction, and Jeff and I loved watching it. She (and this is my favorite) always asks "Do you need any help?" when I'm changing Moe's diaper.

I can guide, but this is their relationship to build. They are each other's.

Posted by Wantapeanut at 9:45 AM