Aggression Has Returned Just in Time for Summer!

I am an emotional wreck. For one thing, I have a cold. It started off as something pretty minor, but has only gotten worse, fueled, I'm sure by stress and lack of sleep.

The last day of school was hard, even though this year was really tough. Moe met very few of his goals and even regressed in a number of areas. Despite that, or maybe because of it, it was hard to say goodbye.

Moe has once again become quite aggressive. He fights almost any time we try to interact with him, especially for things like diaper changes, which obviously happen several times a day. It is 8am, and I have already been scratched across the face and had my glasses pulled off. I just updated my contact lens prescription so I don't have to deal with that last part anymore.

His behavior has been gradually getting worse. For the last few months, he's been fighting us at night when we get him ready for bed. This has been incredibly annoying, but I do believe it is functional: he is telling us he doesn't want to go to bed. Unfortunately, when Moe stays up too late, he gets really wild and out of control. We have tried doing calming activities or allowing him to "get his wiggles out" at this time, like taking a walk, playing outside or taking a bath but nothing seems to work. We don't know what to do, so for everyone's safety, and because Moe does so much better when he gets enough sleep, we put him to bed. An hour later, we go in and change his diaper, then he'll usually fall asleep for good somewhere between a half hour and two hours later. This is the routine every single day.

But over the past couple weeks, Moe's aggression has gone beyond bed time. I don't know why. Perhaps he's feeling sick as well, though he doesn't have the same symptoms I do. Perhaps he's picking up on other stresses in the house, as we enter into our round three of our IEP meetings. Perhaps he hasn't been sleeping well and is just tired. Or maybe he just thinks it is fun to hit me.

But I can tell you one thing: I hate this.

I hate always having to position myself between Moe and Jelly because I'm afraid he's going to hurt her. Twice recently, he has grabbed her hair simply because she was the closest thing available.

I hate being constantly on alert, worried that Moe is going to break something or hurt himself or run away. I dream about losing Moe. I see him running away and I can't get to him. (These have replaced the dreams I used to have about my brother. My dreams are not very hard to interpret.) I wake up most mornings with my teeth clenched.

I hate that I can't walk across a parking lot without Moe dropping to the ground ten times.

I hate that I have to spend hours and hours preparing for meetings with the school. That I have to negotiate for my son's education. That we have to hire a psychologist and an educational advocate just to convince the school district that Moe needs a new placement, even though it is clear that the class he has been in for two years isn't working for him.

I hate feeling guilty that I wish this weren't my life. I have so many things to be thankful for but they all seem overshadowed by these challenges. I want to be planning summer vacations and getting Moe ready for kindergarten. I want to be able to bring the kids to visit their grandparents. I want my kids to be able to play with each other. I want to hire a babysitter and go out to dinner and not have anxiety attacks about it.

Acceptance is hard when we're all struggling so much.

I want this sweet little boy who is curled up on the couch playing harmonica to stop making it seem like I'm lying about what a terror he is. 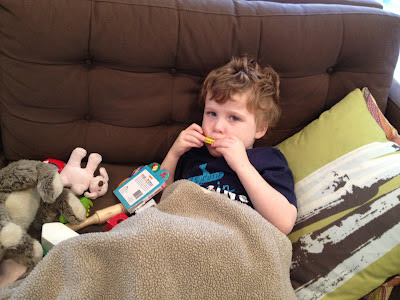 We are making changes. My mom is coming down this week (thanks mom!) to help while I have both kids at home. Jelly goes back to school next week, and Moe's summer program will start. This IEP stuff will be over one way or another. But as Jelly said to me the other day, "I don't want to be sad. I want to be happy."

Posted by Wantapeanut at 9:21 AM