Moe is now in his fourth week of preschool, and we’re pretty thrilled about how it is going. Despite the fact that I have already had to pick him up early from school a few times because of a bloody lip and a bout of, let’s just say a stomach ache, I am for the first time 100% positive that he is in the right program.

There are many, many different programs for kids with autism and they are based on many, many different philosophies, like Floortime, ABA, or PRT. Ours is based on the Competent Learner Model. In practice, most of these programs seem to me to look very similar, and I’m convinced that the success of any given program depends first and foremost on the skill of the teachers involved. And Moe’s teacher, the Magnificent Mrs. M, is the best. There are also two permanent aides in the classroom.

Mrs. M sends home a communication book every day with a quick note about what happened in class that day. I think all of the kids get the same basic summary, but often there will also be a little handwritten note from Mrs. M. Parents are encouraged to write in the book to send messages back as well.

Here is part of the note from the first day of class. 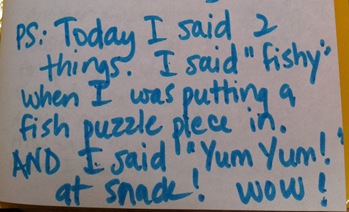 Moe, who barely spoke a word the entire summer, talked in class. This does not seem to be a fluke. From the second day of school: 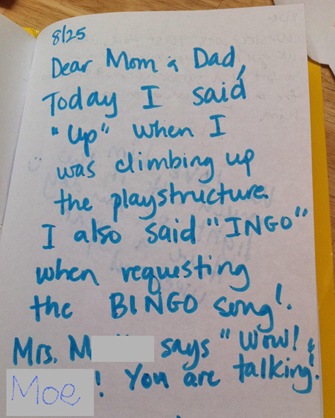 The book is full of notes like this. Every day, Moe has a little bit to say. Even last week, when I picked him up early because of aforementioned stomach issue, Moe’s note said he “did the hand motions for my favorite song…The Monkey!” And this seems to be transferring to home as well. Moe has been using words here and there, and he even spontaneously asked for water – using the sign for “I want” while saying “water.” I didn’t prompt him, he just made a request. This is HUGE. It means he isn’t just labeling things. He is starting to communicate. I’m hopeful it continues.

Here is my favorite note so far. I think you’ll understand why I think there is something very special about this classroom. This is from the day after Moe had fell on the playground. 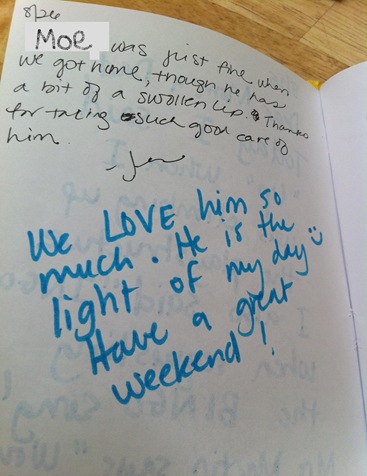 He’s the light of my day too.

Posted by Wantapeanut at 3:44 PM