It's been one of those weeks.

Jelly's first tooth broke through this weekend. I thought that was the reason for her recent night wakings, and it probably was at first, but now she also has a cold. It's a bad one. I have never seen so much snot in my life and neither one of us is too happy about it. The last few nights she has been getting up at 4am and the only thing that seems to help is a bottle (formula for her, pinot noir for me).

Moe may or may not be sick. He woke up yesterday and today with a runny nose, so I canceled his therapy sessions. But then he seems fine the rest of the day. Is he already fooling me into skipping school? He's actually taking a nap right now, so he probably is sick. I just hope I don't have to spend the next 4 days wiping his nose. Unlike Jelly Belly, he can fight back.

Then there's Berkeley. This week, we started her on an anti-anxiety medication. It's brilliantly called "clomicalm." So far, she does, in fact, seem calmer - mostly sleepy, but the vet said that was normal for the first few days. I'm not actually sure if her sleepiness is because of the meds. It might be because her tail is hurt. That's right, Berkeley busted open her tail. "How did she do that?" you ask. By wagging it. Berkeley gets so excited when anyone comes in the house that she wags her whip-like tail hard against anything in its path. Most of the time, that's the wall, and a couple of days ago she busted her tail right open. And, here's the thing: it's not the first time she's done this.

So today, Jeff comes home for lunch to check on everybody, and Berkeley goes nuts. Blood is spraying everywhere. Walls, furniture, the baby things I had all cleaned and laid out because I'm getting ready to sell them. It's unbelievable.

I just got an email asking for updates for my MBA class notes. Two of my classmates just got married. Another just published a book. I'm washing bouncy seat covers and cleaning blood off the walls. 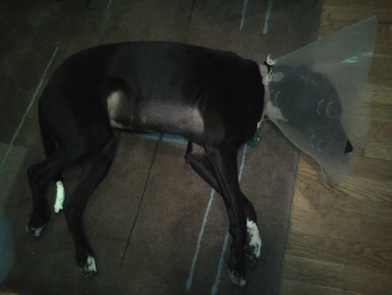 Posted by Wantapeanut at 3:57 PM