In my last post, I wrote about some of the things we're doing to help Moe learn to respond to his name. I'll admit I am not doing a great job of not saying Moe's name throughout the day unless I have an immediate reward, but I have been pretty good about saying his name when he is looking right at me. And things seem to be improving, although slowly.

Another thing Moe has trouble with is asking for help or requesting something. If there is a toy that Moe can't get to, he'll just move on to another one. If there is something that is frustrating to him, he might whine a lot or get very upset and cry, but he will never, ever ask for help, even just by hand leading you to what is troubling him. If you don't understand that other people can help you, or know that you can make things happen by asking for them, the world must seem like a very frustrating place.

So how do you teach a child that he can get what he needs by asking? Unfortunately, we have to make the world an even more frustrating place. So I've been working on a project I'll call "toy lock-down." I started by boxing up a lot of the toys, labeling them with my awesome new label maker, and putting them on the shelves in the living room. I was quite satisfied with this arrangement. 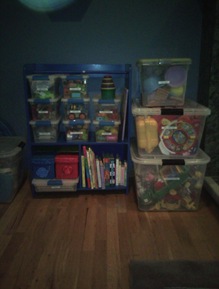 It turns out, however, that this wasn't enough. These toys, although they are great ones for use during therapy sessions, aren't actually very interesting to Moe. So he moved on to other toys. We also decided to clear the shelves in the living room and his bedroom so that we can put just two or three boxes out at a time and have Moe make a choice, like "Do you want cars or beads?" Unfortunately, the answer to that question is usually "Neither. I want the shopping cart with all the lights and sounds." So, enter phase two.

Shopping cart is in the garage, available only when we bring it in as a very high value reward. Other lights and sounds toys have been either boxed up or hidden away. Every box will have a picture of the item or items inside. Moe's closet, a favorite hiding/hanging out space, now has a childproof lock on it. We've added a tent in our living room so that he has an enclosed space to hang out it, but in a more social way. Here is where we are now: 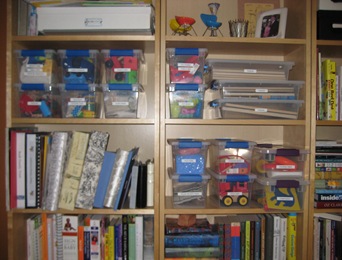 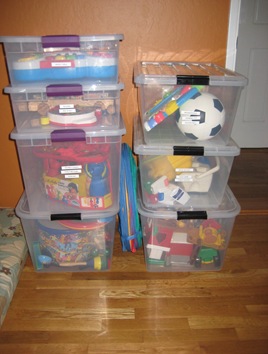 There is more still to do. I need to free up another shelf. I have to finish taking and printing the pictures. I have a few toys that we're going to give away because we simply have too many. So far, I haven't seen any improvement with requests ("manding" in ABA-speak) and it breaks my heart to keep taking toys away from Moe. I imagine him sitting in the middle of the room doing nothing while there are boxed up toys all around him. Actually, he probably wouldn't mind that. Moe is more motivated by snacks or a favorite video, so we'll be using those as well and taking it one step at a time.

Posted by Wantapeanut at 1:22 PM