This past weekend was a mixed bag for us. Last week, Moe just wanted to bite everything. Although that seemed to subside a little, Moe seemed to be having a bit of a sensory breakdown, with some pretty manic highs, laughing and running around, and followed by bouts of intense frustration at everything an anything. Nothing in our usual bag of tricks (like deep pressure or a blanket swing) seemed to help. All yesterday morning, he wanted to be in the dark closet, or he would bury his head in my lap or in the couch. We had a 4 day break from ABA sessions, so maybe the change was having an effect on him. I don't know.

Sunday night, Jeff and I had a, ahem, "discussion," about what was going on. I, of course, worry that this was just the first indication of some serious issues we're going to have for the rest of Moe's life, and Jeff takes the view that all two year olds have rough times and that is why they call them the terrible twos. It's a stupid argument to have because no one knows. The night ended with me in bed with a terrible, vision-blurring, nausea-inducing headache which I called a migraine but since I don't really get migraines it was probably a stress headache.

On Monday, Jeff was back to work. We decided to have his OT session at the center where they have swings and stairs and other equipment. As I was telling his therapist about some of his behaviors this weekend, I realized some pretty amazing things happened as well.

First, Moe has really started taking an interest in coloring. He has colored before, but he wasn't really into it. Now, Moe will stand at his easel and draw with crayons or chalk for fifteen minutes or so. He'll pick a color, draw, stand back, admire his work, pick another color. He's very careful about where he's drawing and what colors he's using. It is so cute to watch. I have no idea what's going through his head, but he's clearly thinking about the choices he's making. At the OT session, our therapist watched him color and said his grip is above age level. (I know I shouldn't care about such things, but woo hoo!)

Second, Moe built a tower with LEGO's all by himself. He has never been interested in LEGO's at all. Not even a little bit. And he rarely stacks blocks unless he's almost forced to during a therapy session. But on a whim, I took out the LEGO's and he just stacked a really tall tower. See for yourself. He even put the man on top. 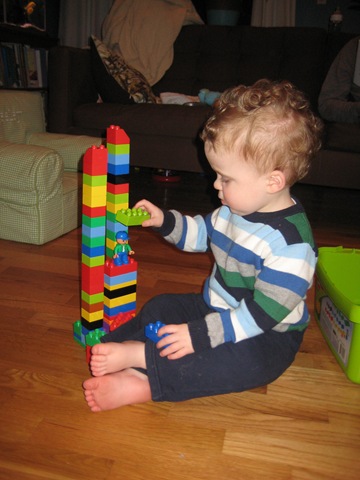 We were all very excited to see developments in those two age-appropriate activities. Like everything with Moe, he doesn't seem to practice things, make mistakes, and eventually be able to do them. He seems to just wake up one day able to do something he couldn't do before. It was like this with crawling and walking too. I wonder if he's been a bit unbalanced because he's going through some big developmental changes.

Finally, we spent some time practicing on stairs. We don't have any at home, so it has been a while since we've had a chance to see how Moe climbs steps. In October, Moe climbed the steps at his grandparents' house by bear crawling up them. More recently, I've had Moe climb steps holding my hand, but had to carry him down. So at the center, he practiced on a set of steps with a kid-height banister and after a bit of encouragement he did them on his own! I like his instinct to reach for a hand, but it was good to see that he could do it solo.

It was a good session and a good day to catch up on his progress. Moe is getting stronger and more coordinated. He is okay with color magic paints now (the consistency of vaseline), but not with shaving cream. He doesn't care much about stickers. I was hoping to get a few more pointers on what to do when Moe is having one of his meltdowns but wrapping him in a blanket seemed to work during session so next time I might try that.

Posted by Wantapeanut at 2:35 PM