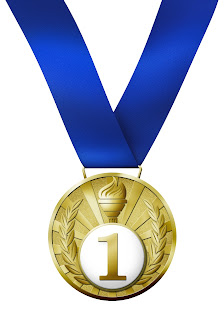 In the special needs community, we like to say "there are no winners in the hardship olympics." There's no better way to make a parent feel lousy than to one-up her with your own problems. You know the type, right? If I said "Poor Moe has had a fever for two days" she would say "That's nothing! My kid once had a 103 fever for a week!" Whatever is going on with you, someone else has it worse. That's a given. But no one wants to play a game of misery one-upmanship.

We all have problems. The truth is, if I had two typically developing kids, I'd be complaining about the same things. And, yes, parenting any child is challenging. We only know what we know. And as the parent of one child with a disability, and one without, I live in both worlds. I complain about Jelly's non-stop chatter in one breath, then pray for words - any words - from Moe in the next. Both are legitimate, and yet one certainly carries more weight. I have that perspective. I also know that things could be worse. Friends' kids struggle with seizures, mobility issues, and other medical concerns we, thankfully, don't have to deal with.

There is a sociological theory (that I can't seem to find a name for) that says that we compare ourselves to others who are out of reach, but just so. In other words, someone might be jealous of their neighbor's new car, or the size of the houses one town over, but they aren't really jealous of, say Oprah Winfrey. Most of us know we can't actually be billionaires. I suppose that's why they call it "keeping up with the Joneses" and not "keeping up with the Winfreys."

I've started feeling this way within the special needs community. I have become much better at not being jealous of my friends' "normal" lives. Instead, I look at other kids with autism. I see the strides they're making and I wonder why Moe can't be more like them. Why can't he at least talk? Why can't he make as much progress with his AAC device? Why couldn't Moe have Asperger's or ADHD instead of being so severely affected with autism?

It is unfair, of course, and takes away from the very real challenges that families struggling with those disorders face. It is also unfair to Moe who is on his own path, and doing the best he can. We are doing our best together but sometimes I can't help myself.

I recently read "Raising My Rainbow," by Lori Duron. The book is about raising a young boy who is gender non-conforming, preferring girl toys and clothes to traditional boy things. Something didn't sit right with me in this book, but I tried to relate to the author's message. As parents of kids with autism understand all too well, it is tough to be a kid in a world where blending in is valued, and standing out for being different for any reason is a call for teasing and bullies. At one point, however, she relates raising her son C.J. to having a special needs child:

My honest reaction to that passage? HOLD THE EVER LOVING PHONE. Your son has special needs because he cannot wear boring socks?? I should have such problems. (Also, plenty of girls don't dance or strike a pose, but that's for another post.) And this passage seems to take away from the very real problems of bullying and isolation that her son may face some day as a boy who prefers traditionally girl things. But my kid can't talk. He isn't toilet trained. He doesn't use a fork. We cannot find an appropriate school for him, for Pete's sake. I have a hard time sympathizing with a family because their four year old (yes - the kid was skill in PreK) likes sparkly socks.

Is this fair? Probably not. And I admit it comes from a place where I already found much of this story somewhat disingenuous. (It seemed to be jumping the gun, for example, to start researching gender reassignment surgery because her two and half year old loved Barbies.) That said, one message is clear. No one has it easy, and everyone's problems are their own. But before you start complaining, try to keep some perspective and remember that someone is praying for the things you take for granted. 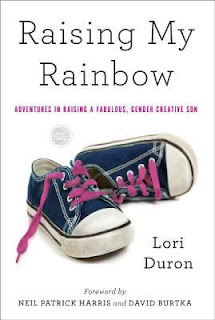 This post was inspired by the memoir Raising My Rainbow by Lori Duron as she shares her journey raising a gender creative son. Join From Left to Write on September 5 as we discuss Raising My Rainbow.  As a member, I received a copy of the book for review purposes.

For other book reviews I've done, see the Book Reviews tab above.
Posted by Wantapeanut at 11:41 AM

Email ThisBlogThis!Share to TwitterShare to FacebookShare to Pinterest
Labels: book review, From Left to Write, Raising My Rainbow, special needs