One time we lost the remote. I'm not talking about the slipped behind the couch cushions kind of lost, this thing was gone. At least until I remembered that Moe had been playing with the remote, and that I had taken a bag of clothes I had been sorting back to Moe's room. Sure enough, the remote was in the bag in Moe's closet.

This phenomenon of household items finding their way around the house is called "domestic drift." In our house, this is more like Household Hurricane, specifically Hurricane Moe, who has a tendency to run into a room, pick up a toy (or more likely some small piece of a toy) and run away with it. Usually, he drops it somewhere where it is easily spotted, but sometimes things become well and truly lost.

This drives me crazy. I cannot stand things like missing puzzle pieces, and always try to make sure I have every piece before cleaning up a toy. But inevitably, something will be missing.

The best thing to do is generally just wait and the piece will turn up eventually. But sometimes you get a brand new toy that has three penguins and then one day later you only have two penguins and you really just want to find the blue penguin because you know it is somewhere in the house and most of the doors have been closed all day so where the f*@# could it be? And other times, you bring out the cool Hanukkah toys, which had all of their pieces, but in two days have lost two candles and one flame.

I just spent the last 15 minutes looking for above items. As I looked, I found a remarkable number of bits and pieces of things hidden in various bins and buckets, so I spent the time just walking back and forth from room to room replacing things as I went. Pieces of toy food went back to the play kitchen, magnets in Moe's room, train tracks in Jelly's, Legos back to Moe's room, etc. It was remarkably satisfying.

But still no penguin.

Update: I have located the penguin! It was in the fish tank. I am not making this up. 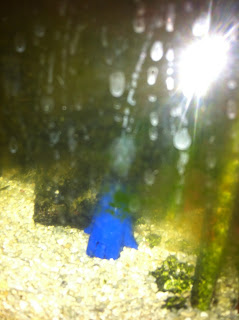 Posted by Wantapeanut at 5:58 PM