Another autism parent I follow on Twitter recently posted a link to a site called Autism Ink. (My Twitter friends also blog over at Both Hands and a Flashlight. If you haven't read them, you should.) The twitter comment was that we really need a positive autism logo. So of course I had to go check out what they were talking about. Go look at Autism Ink. Now, let's talk about this for a minute. Okay, I'll talk, you listen. (But feel free to talk back in the comments below.)

The idea of those t-shirts is that there should be a way to identify kids with autism. That way, when your autie kid has an uber-meltdown at Target, or isn't playing with the other kids at the park, people can have some level of understanding. Sounds nice, but I have so many problems with this.

First, all kids have meltdowns at Target. And every parent is afraid of being judged. Kids with autism may have bigger tantrums than other kids, and they may be older when they still have them. It might be less obvious what set them off. Knock on wood, Moe is generally well behaved when we're out, so I haven't (yet) experienced one of these horrible tantrums in public. When I do, I'm sure it would be nice to get a pass, a card I could just hold up and say "not my fault: autism kid." One of the designs on the autism ink site even says "ain't misbehavin." Yes, you are! Would pointing out that my kid has autism really make anything better? Maybe for me, for a second, but the tantrums would still happen and I would still need to deal with them and figure out how to avoid them in the future and give my child other ways to behave. Not that it's easy, but it is still necessary.

I also don't plan to ever let autism be an excuse for Moe to not do the things I know he can do. If I let autism excuse his bad behavior, won't I also be tempted to start using autism as an excuse for not pushing him to achieve? If you ever hear me say "he can't do that - he has autism," please slap me (or at least remind me of this post). I'm not saying I expect Moe to be able to do everything a typical 2 1/2 year old can do. But I will expect Moe to perform to the best of his abilities.

But here's what really gets me. The expression of the child in the picture just perpetuates the stereotype that people with autism are unfeeling. In fact, one of the images spells this out by labeling the same picture "sad," "happy," "anxious," "mad," etc. Believe me, I have seen this expression many times, blank stare, eyes averted. In fact, here it is: 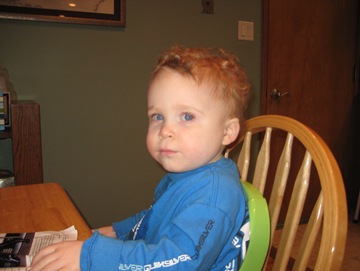 But I've also seen this face: 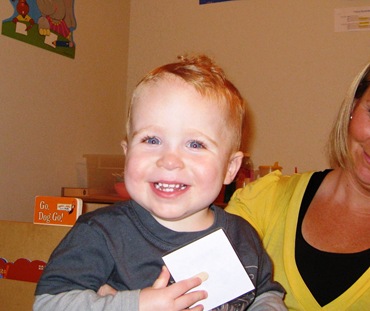 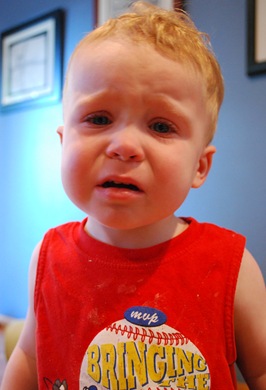 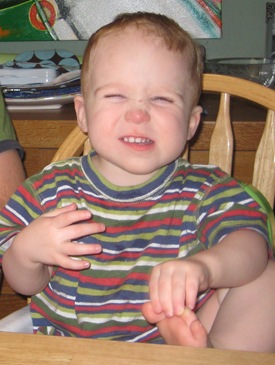 I know Moe has feelings and that he gets angry, frustrated, sad, and happy. He is sometimes mellow and sometimes goofy. And though he may not always be able to express it in words, I know that he loves me. You know how I know? I see it in his eyes.

Posted by Wantapeanut at 2:05 PM